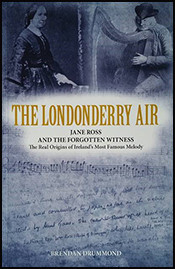 The Londonderry Air- Jane Ross and the forgotten witness. The real origins of Ireland's most famous melody. Brendan Drummond

For the past century 'The Londonderry Air' has been famous throughout the world- a veritable icon of Irish culture. Little, however, has ever been known of its real origins- a void that has been eagerly filled by a host of folklorists. This book reveals previously unpublished papers and letter from the Ross family which tell a very different story from the usual legends. These records had been in the possession of the closest surviving descendant of the Jane Ross who discovered the Air- a descendant whose existence had somehow escaped the notice of all previous researchers. They are now being given the publicity they desreve, and which their authors originally intended.

Dr Brendan Drummond is a graduate of Oxford University, the Royal College of Music and the University of Ulster. For many years he was sriector of Music at schools in England and N Ireland. He has published a number of papers on music education and history, and has been a music examiner for Trinity College London for the past decade.