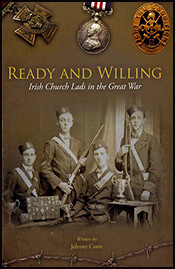 The Church Lads' and Church Girls' Brigade is embarking on a project to commemorate the contribution of Irish Church Lads to the Great War. Brigade lads from Ireland, joined with members from all parts of the world, from Australia, Britain, Canada, Newfoundland, New Zealand and South Africa, to provide a remarkable story involving great courage and sacrifice.

It is estimated that a quarter of a million former members of the Church Lads' Brigade volunteered for service during The Great War. Virtually every Brigade member of appropriate age, nineteen years for the army, joined the Colours immediately. Many younger lads lied about their age and soon found themselves facing danger at the front.

Hundreds of Brigade lads from Belfast, over one hundred from Limerick, and dozens more from Armagh, Ballymena, Cork, Drogheda, Enniskillen, Lisburn, Londonderry, Portadown and Portrush, joined up, to do their duty.

Mostly they fought with the famous Irish regiments but many served with English or Scottish regiments. Others, who had emigrated to Australia, Canada or New Zealand in search of a better life, returned to fight with the armed forces of their adopted countries.

By the end of the war, 20,000 Church Lads had been killed and another 20,000 wounded. Over 1,000 decorations for bravery had been awarded, including 21 Victoria Crosses. The French Government presented Brigade Headquarters with a Diplome D'Honneur and Medal in recognition of the contribution of the CLB to the War Effort.

This book retells their stories and creates a permanent record of the contribution of those brave Irish Church Lads.