I’ve always had a fascination for movies. It all started when my RE teacher in school spent most of our lessons showing us Religious epics and other such documentaries and dramas. One film which stands out in my mind which he showed us was a made-for-tv, 2 part epic from the early 80s called ‘Peter and Paul’, a faithful retelling of events within the book of Acts, with Anthony Hopkins playing the part of Paul. It was stunningly made, and Hopkins portrayal of Paul really stood out in my mind, and sparked off in me an interest in the actor’s work. I wanted to see more of what he did, and I went through a phase of discovering more of his films, and in particular, his period dramas. ‘ Howard’s End’ ‘The Remains of the Day ’ ‘Shadowlands’ ‘The Elephant Man’ all these films became firm favourites with me when I was growing up. I remember one performance which actually at the time had no effect on me whatsoever. It was a film called ’84 Charing Cross Road‘ with Hopkins playing the role of a bookshop owner. I was too young to fully appreciate what I was seeing unfold. But at the end of last year, the film re-appeared on BBC2. I recorded it and Julie and I saw in the new year watching it. We both absolutely loved it. And then I immediately ordered the book on which it’s based, and loved it even more! It’s such a charming, poignant story. It’s based on the letters of Helene Hanff, a writer who loved books, and adored London, yet never visited it. She was on the lookout for old and rare books, which she couldn’t find (or perhaps didn’t want to find) in America. So, she started correspondence with bookseller Frank Doel who worked in ‘Marks & Co’ bookshop based at 84 Charing Cross Road in London and he was able to provide her with the books she was looking for, most of the time. One of my favourite letters is the one in which Helene has requested the book ‘ Idea of a University’ by John Henry Newman. The bookshop has a first edition which they ‘wrap’ for her and send out. Her response is as follows.

All I have to say to YOU Frank Doel, is we live in depraved, destructive and degenerate times when a bookshop- a BOOK SHOP- starts tearing up beautiful old books to use as wrapping paper. I said to John Henry when he stepped out of it:

‘Would you believe a thing like that, Your Eminence?’ and he said he wouldn’t.

You tore that book up in the middle of a major battle and I don’t even know which war it was.’

Helene’s warmth and hammer wit seemed to spark a chord with Frank, and indeed the other staff members, who over the years also corresponded with her. 20 years to be precise on and off. Helene made various attempts during that period to head to London and visit the shop, but something always came up which prevented her from doing so, until it was too late. There’s a tragic irony in that, and one which we as individuals experience all the time. Sometimes there are important things we put off to another time. People we always meant to keep in touch with or visit or spend time with. And then suddenly, they’re no longer there, and the opportunity is gone, and we’re left with regret. If only we’d made more of an effort. If only we hadn’t let other things get in the way. 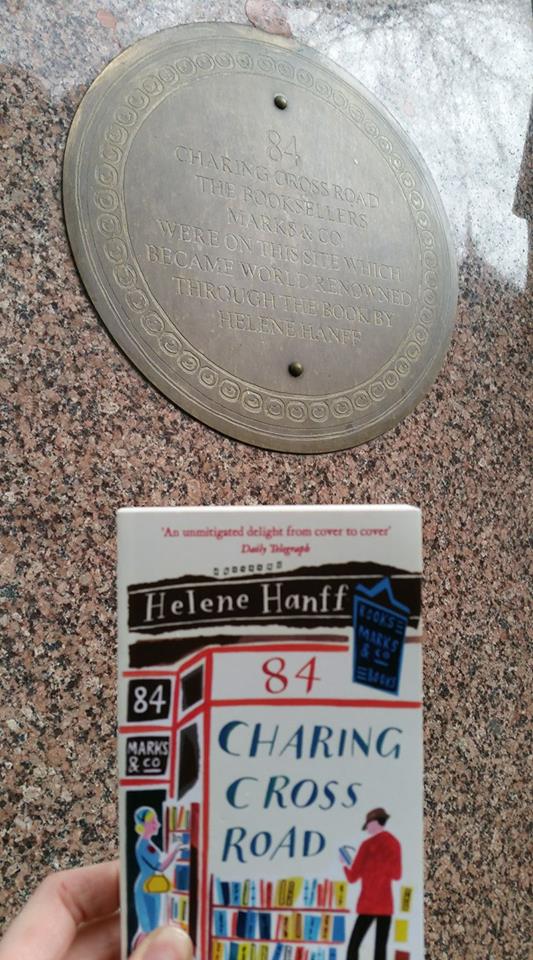 The day we watched 84 Charing Cross Road we also found out that Julie’s brother had been named in the Queen’s New Year Honours List for his services to Sexual Equality. In the weeks which followed, we made the decision to travel over to London for the ceremony of investiture. It would be our first major family holiday together. As we started our planning, I suggested to Julie that if we had time, I’d love to go to 84 Charing Cross Road. Julie thought I wanted to have a McDonald’s, because sadly that is what is currently at that address, though there is a plaque on the wall which reads

‘84 Charing Cross Road. The Booksellers Mark’s & Co were on this site which became world renowned through the book by Helene Hanff’

It’s a plaque and history that can be easily missed by booklovers and passers-by, ironically as Charing Cross Road is a booklovers paradise! Not only is the road and its side-streets full of little independent, antiquarian bookshops, but also the home of the Palace Theatre which is currently staging ‘ Harry Potter and the Cursed Child .’ Booklovers and Potter Fans alike take photographs of the theatre’s well-lit up façade, and there’s me directly opposite, taking photographs of a well-known fast food chain and the dull plaque which many don’t pay any attention too. A tale of two books!

Charing Cross Road is also home to Foyle’s bookshop- 5 floors of bookish heaven! What a warm feeling when you arrive in and see the words before you

‘Welcome Book Lover, you are among friends.’

And among friends we were, as we had arranged to meet up with one of my book loving friends Jessica, who hosts her very own book show on Canterbury Student Radio. Foyle’s was the perfect place to catch up and to do a sneaky recording for a forthcoming edition of Jessica’s ‘Dear Reader’ show. When she asked me what I’d like to talk about, I said that it had to be 84 Charing Cross Road .

I felt an immense feeling of loss when I finished reading the book. I mentioned earlier about the loss of missed opportunities. I also feel sad when I hear of a bookshop closing down. Maybe it’s because I’ve felt that loss first hand, and fear ever feeling it again. So many bookshops have closed over the years, and yet there are so many fabulous ones out there, especially here in Northern Ireland. Each with their own soul, their own ministry, their own uniqueness and character. None in competition with each other, but rather equal in offering a safe place to readers, a haven, a privacy where they can escape for a while and find that important book they need in their lives. And how do they find that book? Yes, sometimes they do stumble across it by accident. But most of the time it’s by communication. A friend’s recommendation or a kind word from a friendly shopkeeper. And then how do we communicate that ourselves? Some will click on the button of a big corporation’s e-commerce website and the cold transaction is completed with no further human interaction. Which leads me to another feeling of sadness. The loss of the great art of communication.

I was naive to think that our shop would survive as a website alone. I missed chatting to the public immensely. And the joy of opening a shop again just to have that one-to-one interaction with people was exhilarating. In a fast-paced world, we’re spoilt by wanting and getting everything instantly! When reading 84 Charing Cross Road, I’m struck by the fact that there are no e-mails, there is no website and therefore no one-click, or add to basket option. There is no instant payment. Everything that happened was done by invoice, postal order and letter. And products were received, even if sometimes it took a few weeks. And what did that lead to? A 20-year trusted friendship between a bookshop and its loyal customer; a relationship full of charm, wit, trust and banter. And one extremely happy customer with her books. So many lessons we can all take from this.

What I took away from 84 Charing Cross Road is that the bookshop lives! ‘Marks & Co’ may have long gone away, but its spirit lives on. The reams of bookshops which surround the area is a tribute to this once historic institution. Some even have displays of Helene’s books in the window. Despite closures of other long established bookshops throughout the UK, there are those who are standing the test of time and against the dominance of the internet by providing what is still a much-needed service. There was so much love and affection with every letter Helene wrote to that bookshop. I urge you to carry that forward. Love your bookshops. Embrace them. Spend time in them. Make new discoveries in them. Form friendships in them. Get lost in them. Because one day you might just owe it so much.

To order a copy of 84 Charing Cross Road, go to http://www.thebookwell.co.uk/84-charing-cross-road/